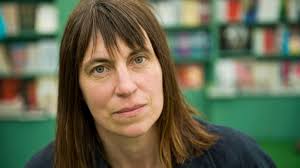 “the hour has not yet ended in which under a cloth of laurel I sat quite still,”
- Alice Oswald, Falling Awake

The Shaking Bog concludes its literary programme with one of the most important poets living and writing in the English language today, Alice Oswald.

Drawing upon acute observations of nature and place, she vehemently resists sentimentality and stereotypes. Her work has been described as ‘fierce’ and ‘muscular’. She plays with form and is uncompromising in her honesty. Describing her own work, not so much as poetry but as ‘sound carvings’, it begs to be spoken aloud. As Jeanette Winterson describes her; “Alice Oswald is making a new kind of poetry…There is nothing fancy about it – she is doing the job, simple and enormous, of reworking the model for the 21st century …”

It is an extraordinary honour to welcome Alice Oswald to the Glencree Valley for this intimate reading followed by a conversation with writer & filmmaker Alan Gilsenan.

Alice Oswald lives in Devon and is married with three children. Her collections include Dart, which won the 2002 T.S. Eliot Prize, Woods etc. (Geoffrey Faber Memorial Prize), A Sleepwalk on the Severn (Hawthornden Prize), Weeds and Wildflowers (Ted Hughes Award), Memorial (Warwick Prize for Writing), and Falling Awake, which won the 2016 Costa Poetry Award and the Griffin Prize for Poetry. She was the first female poet ever to be elected as the Oxford University Professor of Poetry in 2019.

“Fierce in the quality of her attention, often metaphorically dazzling, Oswald earns our trust through her authority.”
- Fiona Sampson, The Guardian
‍

“Poetry is not about language but about what happens when language gets impossible.”
‍- Alice Oswald, The Guardian, 22 July 2016‍