In Concert With Catherine Fitzgerald 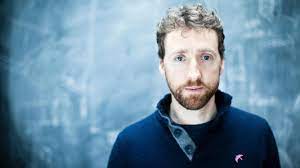 “In a crowded field of outstanding Irish fiddle players and interpreters of traditional music Colm Mac Con Iomaire is unique. His voice is unmistakably his own and his music bears distinctive creative hallmarks which have as much to do with his personality and character as with his impressive technical mastery, musical authority and exquisitely expressive playing.”
‍- Nuala O’Connor

The Shaking Bog is over the moon that Colm could join us - along with the wonderful pianist Catherine Fitzgerald - for a concert that delicately interweaves music with personal memoir. Excerpts from Primroses, a beautiful short prose piece, written originally for The Shaking Bog Podcast will be woven into Colm’s sublime playing to create a compelling and intimate performance.

Dublin-born, but now Wexford-based, Colm Mac Con Iomaire is an acclaimed violinist, composer, film score arranger, and a founding-member of hugely successful Irish bands: The Frames and Kíla. Colm has spent over two decades touring the world playing music. He released two solo albums to critical acclaim: The Hare’s Corner (2008) and And Now The Weather (201) .

Catherine Fitzgerald is a classically trained pianist from Cork who has collaborated with many musicians in projects ranging from traditional to classical. She premiered a new work by Natasha Paterson in the National Concert Hall in Dublin for the Irish Composer’s Collective and she has toured nationally and internationally with Colm Mac Con Iomaire since 2008.